Precious metals on the rise Gold has entered September in buoyant mood as it continues its rebound towards $2,000/oz. The combination of a weaker dollar, lower real yields and the US Fed Vice Chair Clarida talking about yield-curve control (YCC) are the key drivers behind the latest move higher. Widely considered influential in setting the Fed’s policy, Clarida was more specific in discussing an eventual yield-curve-control policy in a speech yesterday than was Fed Chair Powell in a major speech last week. He said that while conditions for YCC were not "warranted” at the present time, it “should remain an option that the committee could reassess in the future if circumstances changed markedly.”

Whether for this or for other reasons, the USD dropped to broad new lows, especially against the Euro where speculators through futures have accumulated a record short. While US ten-year yields  remained range-bound as per the chart below, the underlying components of real yields and breakevens continues to move in their separate and gold supporting ways.

Today the 10-year US real yield touched a record -1.1% today while inflation expectations as seen through the breakeven rate has reached a 16-month high at 1.82%. 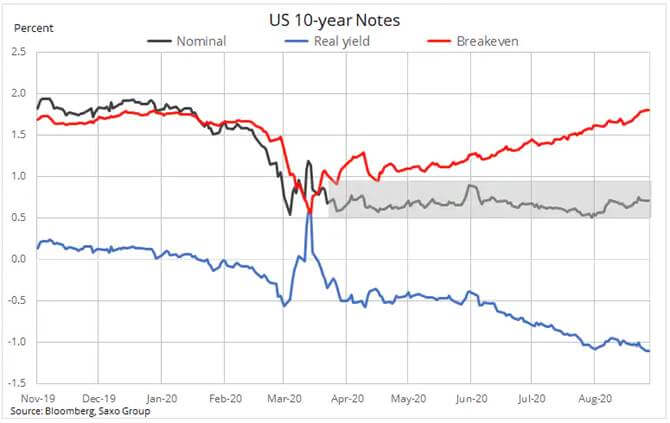 The Gold-Silver ratio (XAUXAG) which measures the value of one ounce of gold in ounces of silver has dropped to 69, the lowest since 2017. The renewed out performance occurred in response to a supportive rally in copper which reached $3.0945/lb in Asia after China reported a better-than-expected Caixin PMI Manufacturing data. In addition to these growth positive news copper has now for several weeks been supported by tight supplies at warehouses monitored by the major futures exchanges together with the weaker dollar, not least against the Chinese Renminbi which has rallied to a 15-month high at 6.82. 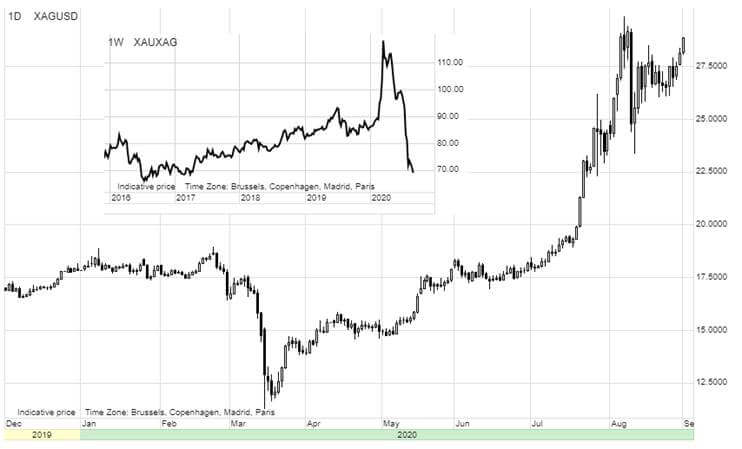 Gold is once again taking aim at the psychological $2000/oz level above which the price has only closed five times back in early August. The trifecta of dollar weakness, falling real yields and the general level of risk appetite should potentially already have seen it back above that level. Perhaps a sign that the period of consolidation may extend a bit further before the price eventually mount a challenge at $2000/oz and the next level of resistance at $2015/oz.

The underlying demand remains firm with the pension funds and real asset managers around the world increasingly waking up to the need for inflation protection. Not because inflation is an issue but just as much because they don’t want to be left without when and if inflation becomes an even bigger theme than now.

Our positive view on precious metals remain unchanged and has if anything been strengthened by the latest developments. The biggest risk to the bullish narrative remains the risk of corrections hitting key markets such as the dollar and stocks. A stronger dollar would reduce the tailwind while a sudden stock market correction may drive the need for cash, something gold liquidation can provide. 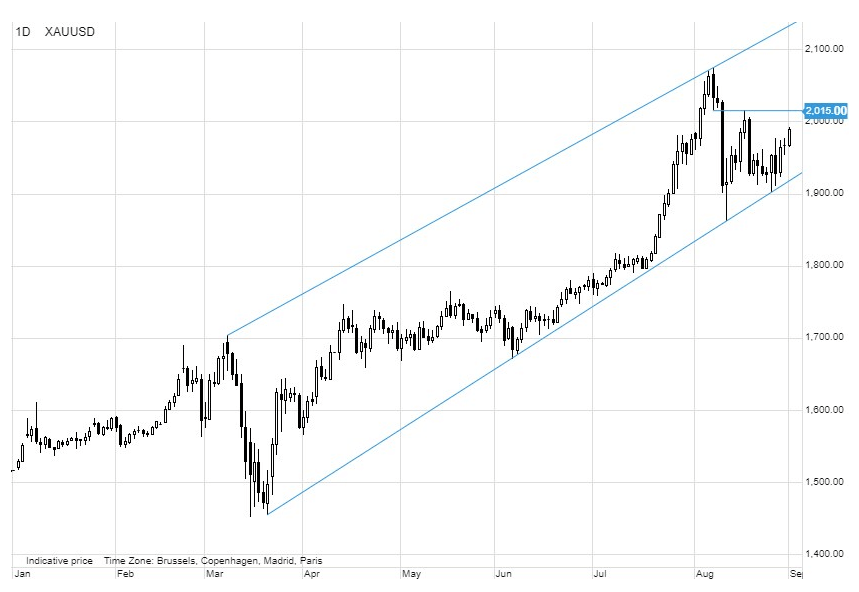